My Grade 11 class is studying conics… mostly somewhat dry stuff such as graphing and converting from general to standard form. My partner teacher Elena and I wanted to improve on the assignment given by the previous teacher, so she dug around and came up with a parabolic dish project, which I then adapted for our classes.

Students started by creating a small model of a parabolic dish from a pattern (to left). They then measured this dish’s diameter and height and calculated the location of the focus. They then did some research on solar cookers, to try to determine what design would work best and be possible to build. Finally, they were asked to bring in materials and given one class period to construct their solar cooker!

There were various ways the students decided to construct their parabolic solar cookers. Some used cardboard patterns such as the one we started with (below to left), and a few groups got clever and used an umbrella covered with tinfoil (below to right). While all of these groups successfully heated the water up a few degrees above the control, which just sat in the sun, none of them had very impressive results. We figured this was due to slight differences between their models and true parabolic dishes — the wrinkles in the tinfoil and the approximation of the parabolic shape, for example. 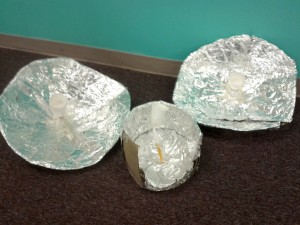 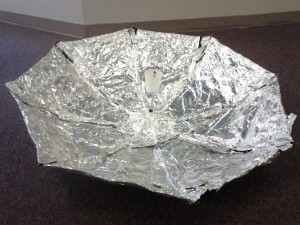 One group got very clever and brought a pre-existing metal parabolic dish, which reflected light to a point so well that it could burn wood, and very quickly heated up the water by 15 degrees. However, this group was not able to construct a free-standing apparatus for their parabolic dish.

Overall the project was a success. The groups learned about what the focus is for–some of them had started by trying to attach their water at the bottom of the dish–and how to calculate its location given their measurements. It was an easy and practical application of conics that the students can see in their daily lives: they all likely have satellite dishes for TV at their house, for example. Of course, we also had some fun constructing and testing the projects!

View all posts by Stephen